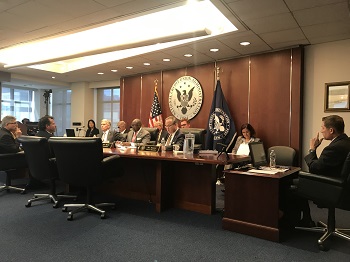 The NCUA Board Thursday finalized three rules that are intended to reduce credit unions' regulatory burden and allow the industry to better serve members. The rules, which were passed largely as proposed, will expand the agency's payday alternative loans (PALs) program, modernize portions of the federal credit union bylaws, and simplify supervisory committee audit requirements.

The board passed the final rule to establish PALs II in a 2-1 vote. Of note, the new option does not replace the existing PALs option, and the agency decided to not move forward with a PALs III option at this time. The PALs II program:

"This must strike the appropriate balance between flexibility and consumer protection," said NCUA Board Chair Rodney Hood during the meeting. "Federal credit unions should consider how this loan will benefit a member's financial well-being…I fully expect that credit unions will offer these loans in the best interest of its members."

Commenting on the proposal, NAFCU recommended more flexible parameters so that credit unions can develop a PALs option that best meets their members' needs. The association continues to urge the CFPB to expand its PALs safe harbor to ensure it covers all loan options; however, the NCUA noted that PALs II can be structured to fall under the existing safe harbor.

The rule will be effective 60 days after it is published in the Federal Register.

Passed unanimously, the final rule codifies in one place several existing NCUA legal opinions and clarifies several bylaw provisions. The rule details guidance to help credit union officials, employees, and members better understand bylaw provisions, including a credit union’s ability to limit services to a disruptive or abusive member. It also clarifies that the process to expel a member is statutory. These changes do not require credit unions to update their current bylaws.

NAFCU recommendations finalized include a quorum requirement that includes board members, staff, and officials. In addition, hybrid meetings are allowed under the final rule without prior NCUA approval.

"I believe the final rule provides a benefit across the credit union industry by improving a federal credit union's ability to manage day-to-day matters related to its operation and governance," Hood said.

The agency noted that the final rule is the outcome of a collaborative effort that began in 2013 with industry stakeholders and the NCUA's general counsel.

The rule will become effective 90 days after it is published in the Federal Register.

The final rule replaces the Supervisory Committee Guide with a simplified appendix, eliminates two audit types that federally insured credit unions (FICUs) seldom use, and eliminates a specific deadline (120 days) for outside, compensated persons to deliver written audit reports to FICUs. As recommended by NAFCU, the Supervisory Committee Guide will remain on the NCUA's website as an additional resource for credit unions.

From the proposal, the final rule drops from the appendix testing for Bank Secrecy Act and anti-money laundering compliance. However, NCUA staff noted that examiners already look at these issues and the final rule does provide for credit unions to establish procedures for regulations.

Hood noted that the final rule "is an example of the NCUA's diligent and ongoing approach to updating regulations and prudently reducing that burden."

"The final rule provides credit unions additional flexibility regarding the timeframe for the auditor to deliver the audit report," Hood said. "While this is indeed modest regulatory relief, it demonstrates that the agency is looking closely at unnecessary or unduly, burdensome regulations."

In response to questions from NCUA Board Member Todd Harper, NCUA staff presenting the final rule noted that their analysis showed very little impact on share insurance fund losses and stated that guidance on the rule would be posted to the agency's website within 90 days.

The board Thursday also received an update on the National Credit Union Share Insurance Fund (NCUSIF), which revealed a net income of $79.1 million for the second quarter.