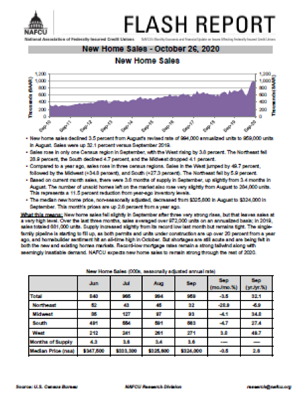 Following three consecutive months of "strong" rises, new-home sales fell slightly in September – declining 3.5 percent to 959,000 units. Compared to a year ago, sales were up 32.1 percent.

"The single-family pipeline is starting to fill up, as both permits and units under construction are up over 20 percent from a year ago, and homebuilder sentiment hit an all-time high in October," noted NAFCU Chief Economist and Vice President of Research Curt Long in a new Macro Data Flash report. "But shortages are still acute and are being felt in both the new and existing homes markets.

Sales rose in only one of the four regions during the month, up 3.8 percent in the West. Sales fell 28.9 percent in the Northeast, followed by a 4.7 percent decline in the South and a 4.1 percent drop in the Midwest.

Based on current month sales, there were 3.6 months of supply in September, up slightly from 3.4 months in August. The number of unsold homes left on the market rose to 284,000 units, an 11.4 percent reduction from year-ago inventory levels.