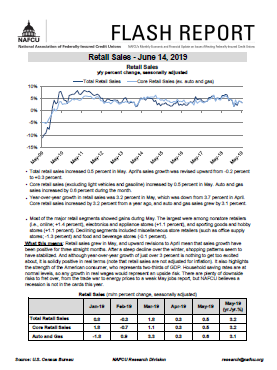 Total retail sales increased 0.5 percent in May, and April's sales growth was revised upward from -0.2 percent to +0.3 percent. NAFCU's Curt Long noted that strong gains in consumer spending may diminish the chances of a recession in 2019.

"Household saving rates are at normal levels, so any growth in real wages would represent an upside risk," said Long, NAFCU's chief economist and vice president of research, in a NAFCU Macro Data Flash report. "There are plenty of downside risks to fret over, from the trade war to energy prices to a weak May jobs report, but NAFCU believes a recession is not in the cards this year."

In the report, Long also examined current consumer trends and how they impact overall economic growth.

"After a steep decline over the winter, shopping patterns seem to have stabilized. And although year-over-year growth of just over 3 percent is nothing to get too excited about, it is solidly positive in real terms. It also highlights the strength of the American consumer, who represents two-thirds of GDP," Long concluded.