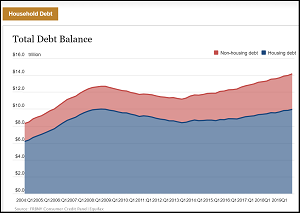 A new report from the Federal Reserve Bank of New York found that household debt rose $193 billion in the fourth quarter of 2019 – the 22nd consecutive quarter of increases. Household debt now stands at $14.15 trillion, roughly $1.5 trillion higher than the pre-recession peak set in the third quarter of 2008.

"Overall, household debt levels are growing at about the same pace as the overall economy," said NAFCU Chief Economist and Vice President of Research Curt Long. "However, rising auto and credit card delinquencies suggests that an increasing share of borrowers are seeing their finances stretched. Recent surveys indicate that credit unions and banks are responding by tightening credit standards."

Mortgage balances, which is the largest component of household debt, increased $120 billion during the quarter to $9.56 trillion. Mortgage originations hit their highest level since 2005, rising to $752 billion, which the Fed attributed to refinancing. Non-housing debt balances rose $79 billion from a variety of debt types, including:

Access more of the association's award-winning research and economic analyses.