Retail sales to be somewhat flat through 2020, says NAFCU 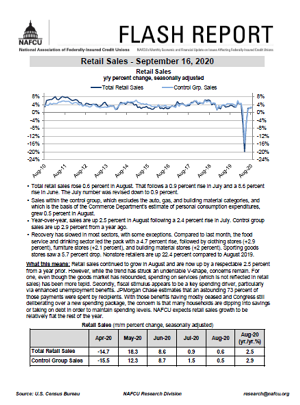 Retail sales showed a small recovery in August and rose 0.6 percent, following a revised 0.9 percent rise in July and an 8.6 percent increase in June. NAFCU's Curt Long stated that, although retail sales growth continued to grow in August and is now up a "respectable" 2.5 percent from a year prior, concerns remain.

"For one, even though the goods market has rebounded, spending on services (which is not reflected in retail sales) has been more tepid," said Long, NAFCU's chief economist and vice president of research, in a NAFCU Macro Data Flash report. "Secondly, fiscal stimulus appears to be a key spending driver, particularly via enhanced unemployment benefits. JPMorgan Chase estimates that an astounding 73 percent of those payments were spent by recipients.

“With those benefits having mostly ceased and Congress still deliberating over a new spending package, the concern is that many households are dipping into savings or taking on debt in order to maintain spending levels,” said Long. “NAFCU expects retail sales growth to be relatively flat the rest of the year.”

Recovery has slowed in most sectors, with some exceptions. When compared to last month, the food service and drinking sector led the pack with a 4.7 percent rise, followed by clothing stores (+2.9 percent), furniture stores (+2.1 percent), and building material stores (+2 percent). Sporting goods stores saw a 5.7 percent drop.

Nonstore retailers were up 22.4 percent compared to August 2019.

Year-over-year growth in retail sales increased 2.5 percent in August following a 2.4 percent rise in July. Control group sales were up 2.9 percent from a year ago.

October 22, 2020 Add to Calendar 2020-10-22 14:00:00 2020-10-22 14:00:00 [INTERVIEW] CU Blueprint for Secure Cloud-First Strategies About the Interview “Moving to the Cloud” can seem like an ambiguous, one-time, heavy-lift project, often leading to misunderstanding and analysis paralysis within credit unions. For your CU to stay competitive, you want to deliver a seamless digital experience that's more than flashy applications. It needs to be built on flexible, secure infrastructure that allows innovation. Join us for this panel discussion and learn practical, proven processes to establish and evolve secure, cloud-first strategies. Hear best practices in communication, talent, and technology, and walk away with a blueprint for your secure credit union transformation. Watch the Interview On-Demand Web NAFCU digital@nafcu.org America/New_York public