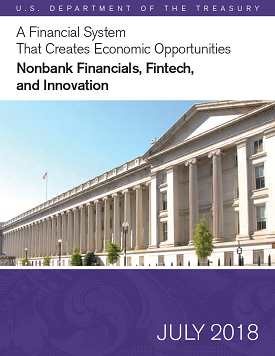 Sharing many ideas put forward by NAFCU, the Treasury Department on Tuesday released a report detailing ways that Congress and regulators could aid the growth of fintech companies. Also yesterday, the Office of the Comptroller of the Currency (OCC) announced that it will move ahead on special-purpose national bank charters for fintech firms, which addresses many of NAFCU’s recommendations regarding fintech supervision.

"How fintechs operate in the financial services marketplace is a critical issue for credit unions, both now and into the future," said NAFCU President and CEO Dan Berger. "We thank the Treasury Department for taking into consideration many of NAFCU's policy recommendations relating to small-dollar lending, TCPA and data breach notifications. While many credit unions partner with fintechs to deliver valued products and services, we believe it to be in the best interest of agencies to balance the desire for regulatory flexibility with concern for overall marketplace stability. We support Treasury's effort to promote financial innovation and better the lives of American consumers."

The Treasury report also touched on the OCC’s charter consideration. "We support the concept of a special-purpose national bank charter for fintech companies," said Berger. "NAFCU believes that fintech companies require a minimum level of regulation and supervision to ensure a level playing field."

As NAFCU continues to analyze the report, here are a few from the more than 80 suggestions relevant to the credit union industry:

NAFCU agrees that fintech produces real benefits to consumers, but any company engaged in core banking functions should be regulated the same way as credit unions. The association continues to support a fair playing field so credit unions have as many opportunities as banks and non-regulated entities as part of its 2018 priorities.