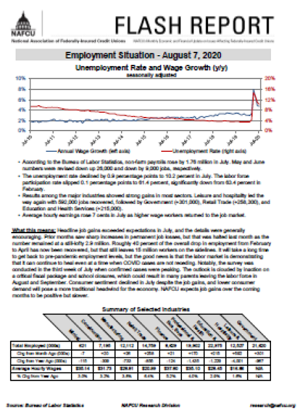 "Prior months saw sharp increases in permanent job losses, but that was halted last month at a still-lofty 2.9 million," said Long. "Roughly 40 percent of the overall drop in employment from February to April has now been recovered, but that still leaves 15 million workers on the sidelines."

"It will take a long time to get back to those levels of employment, but the good news is that the labor market is demonstrating that it can continue to heal even at a time (mid-July) when COVID cases were growing," Long added.

Average hourly earnings rose 7 cents in July, driven by higher-wage workers returning to the job market. Of note, the May and June employment numbers were revised upward by 26,000 and downward by 9,000 jobs, respectively.

"Consumer sentiment declined in July despite the job gains, and lower consumer demand will pose a more traditional headwind for the economy," Long concluded. "NAFCU expects job gains over the coming months to be positive but slower."