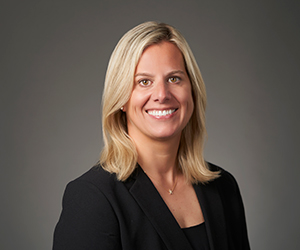 Catherine Porterfield was named vice president of membership and sales in December 2014. Porterfield works with NAFCU's membership division and member service center team to bolster the association's relationship building and to grow membership.

Prior to joining NAFCU, Porterfield worked on conceptualizing and leading major initiatives to increase donors and strengthen involvement from academy members, alumni and parent communities at the International Academy-Amman, founded by Queen Rania Al Abdullah in Amman, Jordan. Porterfield has also held the position of director of advertising and business development at the Wolf Trap Foundation for the Performing Arts in Vienna, Va. In her role, Porterfield cultivated strong relationships with their local, national and international constituent base which led to producing the highest grossing ad sales in Wolf Trap's history.

Porterfield has also worked as vice president of marketing for Tree Top Kids, a specialty retail store. In that position, she tripled the company's customer base in Washington and Chicago by strengthening B2B relationships and sponsorships, and securing local and national media exposure for the company.