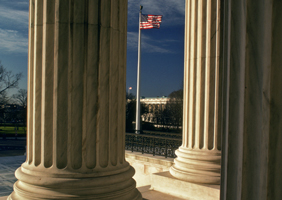 Is it true, Santa? Has the government reached a funding deal?

According to Politico, lawmakers involved in talks to avoid a potential government shutdown announced Thursday that they have reached a bipartisan "deal in principle" to fund the federal government through the rest of fiscal year 2020.

If the agreement is not passed, federal government funding is set to expire next Friday, Dec. 20. A similar situation happened last year, and the resulting partial government shutdown made history as the longest ever at 35 days. NAFCU will continue to advocate against any lapses in funding and for full funding of programs used by credit unions.

The Office of the Comptroller of the Currency (OCC) this week released its semiannual risk report that includes a special section related to cybersecurity. Due to "an evolving technology environment and persistent cybersecurity risks," the agency categorized banks' operational risk as "elevated."

Of note, the OCC flagged use of third-party vendors and fraud threats as main drivers, in addition to constant system updates to keep up with technology.

NAFCU is a leader in calling for national data security and privacy standards. The association works diligently with the NCUA on exam-related cybersecurity issues and has myriad resources available to ensure credit unions can effectively identify and address cybersecurity concerns.

The U.S. budget deficit hit $209 billion in November, rising 2 percent over the month. November is just the second month of the fiscal year, and Congress has yet to pass about a dozen funding bills before the Dec. 20 deadline to avoid a government shutdown.

Last year's government spending ran up a $984 billion deficit – a seven year high. The Congressional Budget Office predicts 2020's deficit will reach $1 trillion and stay above that mark for the next decade. The Associated Press notes that the U.S. ran $1 trillion deficits between 2009 and 2012 as it recovered from the financial crisis.

No deal on tax extenders

The House and Senate remain at odds over a year-end tax bill to extend or fix various tax issues. Among the expiring tax breaks under discussion are some related to renewable energy, ObamaCare, and retirement savings. The package could be included in funding legislation that needs to pass by Dec. 20.

Last year, NAFCU worked closely with the House to include a technical fix to address a provision in the Tax Cuts and Jobs Act that puts a 21 percent excise tax on certain not-for-profits. While the Senate didn't take up that bill, the House Ways and Means Committee included it again in legislation this year.

Ron Snellings, retired CEO of PenFed Credit Union and former NAFCU Board Member, passed away last month. He served on NAFCU's board from 1989-1998, and previously as president of PATELCO and as general manager at Navy Federal Credit Union.

"Ron was a driver of credit union growth and an ardent advocate in Washington, whose commitment to the credit union industry is evident in his many years of service on our board and leadership at several credit unions," said NAFCU President and CEO Dan Berger. "Our thoughts and prayers go out to his friends and family."

April 20, 2021 Add to Calendar 2021-04-20 14:00:00 2021-04-20 14:00:00 Driving Auto Loan Success: 3 Risk Challenges Credit Unions Are Facing About the Webinar  The auto industry continues to show signs of growth and opportunity even through the pandemic. But new risks have also emerged in the last year. During this webinar we'll explore the latest trends and future prospects in the auto market, the risks you need to be aware of, and how to update your strategy for growth. We'll discuss how your credit union can get in the best position possible to monitor and mitigate future risk.  Key Takeaways:  How risk management changed in the face of a pandemic Strategies to anticipate and prepare for risk vulnerabilities and exposure Practical tactics for credit unions to implement in 2021 Watch the Webinar On-Demand Web NAFCU digital@nafcu.org America/New_York public

A Death in the Family: Working with Deceased Accounts