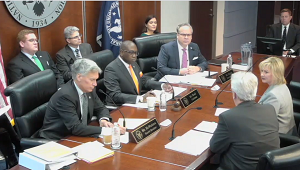 The NCUA Board Thursday proposed a rule to amend the agency's corporate credit union rules, which includes some NAFCU-sought changes. In addition, the board finalized the interagency policy statement on the current expected credit loss (CECL) standard, received briefings on the National Credit Union Share Insurance Fund (NCUSIF) and credit union mortgage rates, and briefly discussed the agency's selling of the majority of its taxi medallion loan portfolio.

The agency Wednesday evening announced the sale of the majority of its taxi medallion loan portfolio to Marblegate Asset Management LLC and released an FAQ. NAFCU had urged the NCUA to do whatever was necessary to obtain fair pricing, which was integral to both the health of the NCUSIF and the impact on the value of taxi medallion loans still held at some credit unions. NAFCU will evaluate NCUA's actions to see if these two goals have been achieved.

The proposal to amend Part 704 would make four notable changes:

NAFCU explicitly called for the first two changes in a letter last year regarding the NCUA's regulatory review. The proposal will be open for a 60-day comment period once published in the Federal Register; NAFCU will gather member feedback and submit comments to the NCUA.

The interagency policy statement describes regulatory expectations for an institution upon adoption of CECL and explains the responsibilities of management and the board of directors when determining allowances for credit losses (ACLs) under Generally Accepted Accounting Principles (GAAP). It would become effective at the time of each institution's adoption of CECL, which is 2023 for credit unions. The board approved its final publication unanimously.

NAFCU for years has shared credit unions' concerns about the negative impacts of CECL to FASB, and the association has continued to push for more guidance and relief for credit unions under the standard with the NCUA and FASB if an exemption is not granted. NAFCU will continue to work with the NCUA on exam expectations.

NCUA staff reported on the NCUSIF's status at the end of 2019, at which time the equity ratio stood at 1.35 percent. Despite the decline in the equity ratio, staff said there were no significant losses to the fund and stronger share growth was responsible.

The board also received an update on credit union mortgage rates based on an analysis of 2018 Home Mortgage Disclosure Act (HMDA) data. Of note, the median rates offered by credit unions were lower than those of other lenders, suggesting that credit unions are serving members at attractive terms.