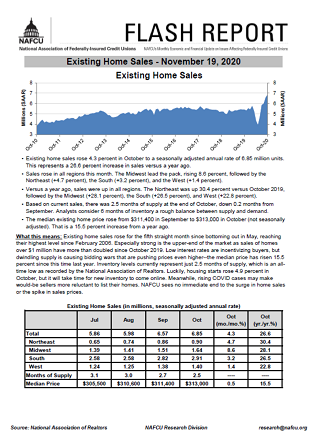 Existing-home sales rose 4.3 percent in October to a seasonally-adjusted rate of 6.85 million units, representing a 26.6 percent increase in sales versus a year ago. In a new Macro Data Flash report, NAFCU's Curt Long notes that this is the fifth straight month that existing-home sales have risen since bottoming out in May, and the highest level reached since February 2006.

Based on current sales, there was 2.5 months of supply at the end of October, down 0.2 from September. Analysts consider six months of supply to be roughly balanced between supply and demand.

"NAFCU sees no immediate end to the surge in home sales or the spike in sales prices," concluded Long.

The median existing-home price rose from $311,400 in September to $313,000 in October (not seasonally-adjusted), representing a 15.5 percent increase from the median price a year ago.