GDP growth falls short of expectations, but NAFCU expects solid growth over the next year 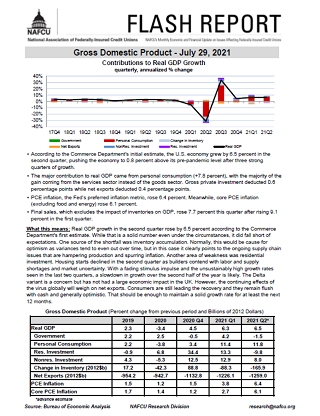 The Commerce Department Thursday released its first estimate of economic activity for the second quarter of 2021, which showed the U.S. economy grew by 6.5 percent. In a new NAFCU Macro Data Flash report, NAFCU’s Curt Long highlighted that "while that is a solid number even under the circumstances, it did fall short of expectations."

"One source of the shortfall was inventory accumulation," said Long, NAFCU's chief economist and vice president of research. "Normally, this would be cause for optimism as variances tend to even out over time, but in this case, it clearly points to the ongoing supply chain issues that are hampering production and spurring inflation.

"Another area of weakness was residential investment," added Long. "Housing starts declined in the second quarter as builders contend with labor and supply shortages and market uncertainty. With fading stimulus impulse and unsustainably high growth rates seen in the last two quarters, a slowdown in growth over the second half of the year is likely."

According to the estimate, major contributions to real GDP came from personal consumption (+7.8 percent), with the majority of the gain coming from the services sector instead of the goods sector. Gross private investment deducted 0.6 percentage points while net exports deducted 0.4 percentage points.

"The Delta variant is a concern but has not had a large economic impact in the UK," Long added. "However, the continuing effects of the virus globally will weigh on net exports. Consumers are still leading the recovery and they remain flush with cash and generally optimistic.

“That should be enough to maintain a solid growth rate for at least the next 12 months,” Long concluded.