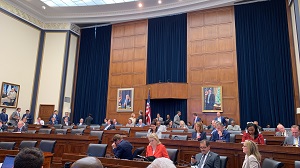 The markup, which includes a number of bills related to reforming credit score reporting, some of which were advanced yesterday, is expected to continue next Tuesday.

Ahead of the markup,  Brad Thaler, NAFCU's vice president of legislative affairs, offered the association's support of three bills. One of them, the Homebuyer Assistance Act of 2019 (H.R. 2852), was advanced to the full House Thursday by voice vote. H.R. 2852 seeks to improve the process for getting appraisals for Federal Housing Administration-backed mortgages.

For more on NAFCU's position on the bills in the markup, click here. The association will continue to monitor the markup and keep credit unions updated on the committee's discussions.