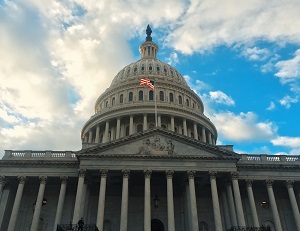 Following President Donald Trump's veto of the fiscal year 2021 National Defense Authorization Act (NDAA) last week, the House Monday, via a 322-87 vote, passed a measure to override the veto. The Senate is also expected to vote on overriding the veto as soon as today. Ahead of the vote, NAFCU Vice President of Legislative Affairs Brad Thaler wrote to congressional leadership to urge them to support the veto override.

In the letter, Thaler reiterated that the fiscal year 2021 NDAA highlights "the important role that defense credit unions play for our men and women in the military in providing traditional financial services and protecting our troops from predatory lenders by protecting credit union military base leases in this legislation."

The final NDAA included several wins for credit unions and NAFCU had previously urged the House and Senate to swiftly pass the legislation after the conference committee released its report. It passed both chambers with large bipartisan margins.

Per the president's urging, the House Monday also voted, in a 275-134 vote, to increase the economic impact payments (EIPs) to adults to $2,000; the current bill provides up to $600 for individuals depending on income level. The House last week attempted to pass by unanimous consent an amendment to the package to meet the president's request, but the measure failed. The bill now moves to the Senate for consideration.

According to reports, Senator Bernie Sanders, D-Vt., has indicated that he will filibuster a vote to override the NDAA veto unless the Senate holds a vote on the increase to the economic impact payments.

The disbursement of EIPs will likely be delayed to at least next week as Congress works to address this issue and the IRS and Treasury ready the payments to go out.

Stay tuned to NAFCU Today for the latest as the bills move through both chambers.