Close
Home Newsroom How will debt collection proposal affect CUs?

How will debt collection proposal affect CUs? 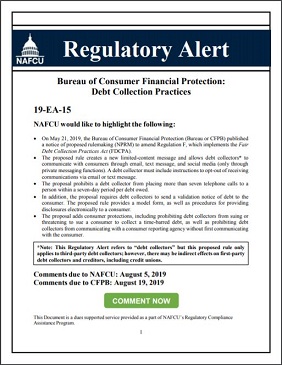 As the CFPB considers a rulemaking related to third-party debt collection, NAFCU would like to know how it could impact credit unions that use third-party vendors or credit union service organizations (CUSOs) to collect debts owed.

In a Regulatory Alert sent to member credit unions Thursday, NAFCU outlined that the proposal would:

The association would like to know, among other things, if credit unions that use third-party vendors to collect debt are concerned about liability, would face increased compliance costs or burdens and would have to update internal policies and procedures related to opt-out notices.

Credit unions can submit feedback on the proposal to NAFCU through its Regulatory Alert until Aug. 5; comments are due to the CFPB Aug. 19.

Transaction Receipts: Are They Required?