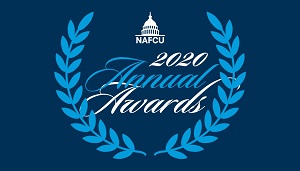 Winners of NAFCU's 2020 Annual Awards were honored yesterday during the association's virtual Congressional Caucus. Eight winners – selected by a panel of credit union peers – were recognized for excellence and achievement in the industry.

Award winners are listed below; they will also be featured in the upcoming November-December edition of The NAFCU Journal.

CEO of the Year

Professional of the Year

Volunteer of the Year

Credit Union of the Year

For information on entering next year’s competition, click here. Interested credit unions are encouraged to begin applying in January of 2021.