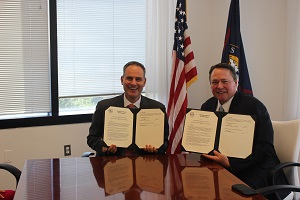 The number of federally insured credit unions' outstanding SBA loans continues to grow, and is up 4 percent year over year. Credit union SBA loans have steadily increased over the years, and have risen by 16.5 percent since 2007.  NAFCU's February Economic & CU Monitor report revealed that credit unions invest in their communities and are an important source of credit for small businesses.

NAFCU previously signed Memorandums of Understanding (MOU) with former SBA Administrators Maria Contreras-Sweet and Linda McMahon in 2015 and 2017, respectively, and continues to work closely with the SBA to strengthen credit unions' ability to fund loans for small businesses in their communities.

NAFCU has remained active on SBA lending issues, meeting with McMahon earlier this year to discuss credit unions' participation in SBA lending programs as well as website accessibility concerns under the Americans with Disabilities Act (ADA) and efforts to modernize the Telephone Consumer Protection Act (TCPA).

The SBA and NCUA have also signed an MOU aimed at increasing awareness of SBA programs and launching a three-year collaboration to provide webinars, training events and media outreach meant to increase credit unions' understanding and usage of SBA-backed loans and resources.

The association looks forward to continuing its partnership with the SBA and working closely with the agency to bring small businesses and credit unions together.

October 26, 2021 Add to Calendar 2021-10-26 14:00:00 2021-10-26 14:00:00 Reaching Out to Gen Z – Is Your Credit Union Relevant? Has your credit union been all about messaging to the millennial generation?  Well, get ready because here comes the next generation demographic - Gen Z, iGen or Centennials. Who are they and what do they want?  Will the same messaging in our efforts to reach millennials work for Gen Z?  In this webinar we will discuss this first generation born into the new century, how they differ significantly from their predecessor generation and the best way to communicate and interact with this demographic. Key Takeaways Discuss how marketers spent too much time trying to understand Millennials and didn’t pay enough attention to the next generation getting ready to finish college Understand that an “if we build it, they will come” approach will not work to attract Gen Z members Walk through mobile first strategies to attract Gen Z, the first generation of true digital natives Register Now$295 Members | $395 Nonmembers (Additional $50 for CD)One registration gives your entire team access to the live webinar and on-demand recording until October 26, 2022.Go to the Online Training Center to access the webinar after purchase » Who Should Attend? Chief Executive Officers Chief Operating Officers Marketing titles Education Credits CPA credit information is below; recommended 1.0 CPE credits. CPA Certification Credit Information Reviewer: Josie Collins, Associate Director of Education, NAFCU Learning Objectives:  See key takeaways Program Level: Basic Prerequisites Needed: None Advance Preparation Needed: None Delivery Method: Group Internet-Based Recommended CPE Credits: 1.0 credits Recommended Field of Study: Specialized Knowledge – Technical About Our Webinars Our webinars are streamed live from NAFCU headquarters near Washington, D.C. Your audio/video feed of the presenters includes presentation slides and downloadable handouts. You can easily submit your questions to the presenters at any time during the live broadcast, with no dialing over the phone! The audio and video stream directly through your computer. Web NAFCU digital@nafcu.org America/New_York public

Reaching Out to Gen Z – Is Your Credit Union Relevant?