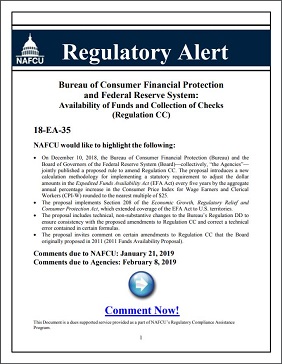 NAFCU is seeking credit unions' feedback on a proposed rule issued jointly by the Bureau of Consumer Financial Protection and the Federal Reserve Board of Governors that would introduce a new calculation methodology for adjusting dollar amounts under the Expedited Funds Availability (EFA) Act to account for inflation.

NAFCU, in a Regulatory Alert sent last week to member credit unions, explained that the proposal:

NAFCU would like to know if credit unions agree with the proposed methodology and the approach to implement adjustments ever five years, and if the changes will pose any compliance challenges.

Credit unions can submit comments to NAFCU through its Regulatory Alert until Jan. 21; comments are due to the agencies Feb. 8.

Transaction Receipts: Are They Required?