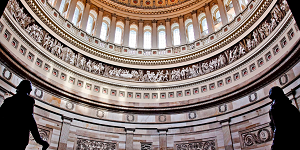 During the hearing, scheduled to begin today at 12 p.m. Eastern, FHFA Director Mark Calabria – who spoke to credit union leaders Monday during NAFCU’s annual Congressional Caucus – will testify before the committee. The hearing will be available via live webcast.

In the letter sent yesterday, Thaler offered the association’s comments on several of the FHFA’s recent actions, including a proposed fee on mortgage refinance loans, a re-proposed capital rule for the government-sponsored enterprises (GSEs), Fannie Mae and Freddie Mac, and the extension of the moratorium on foreclosures and evictions.

On the adverse market refinance fee, Thaler first expressed the association’s appreciation for the FHFA’s decision to delay the new policy until Dec. 1, 2020. However, Thaler also noted the association’s continued advocacy for “a complete reversal of the policy.”

“Although NAFCU appreciates that the GSEs must limit their losses and protect against credit and liquidity risks during the COVID-19 pandemic and subsequent economic crisis, the adverse market refinance fee will have a negative impact on the housing market and could hurt economic recovery efforts,” wrote Thaler.

Thaler added how the fee will affect credit unions by putting them in a difficult position of absorbing the cost or passing it onto their members.

On the re-proposed capital rule for the GSEs, Thaler reiterated NAFCU’s call urging the agency to "adopt a realistic capital framework for the GSEs to begin moving toward exiting conservatorship." NAFCU has been generally supportive of the FHFA's efforts to allow the GSEs to rebuild capital but continues to advocate that certain safeguards are codified by Congress before removing the GSEs from conservatorship.

NAFCU Senior Regulatory Counsel Elizabeth LaBerge recently spoke at an FHFA listening session on this topic to reiterate NAFCU’s concerns with the proposal.

Finally, Thaler reiterated the association’s concerns with the impact of CARES Act provisions related to forbearance options for single-family and multifamily loans sold to the GSEs, respectively. While NAFCU was pleased to see guidance from the FHFA on the GSE’s buying mortgages in forbearance, Thaler stated, the association worries how the loan level price adjustment (LLPA) fee placed on the loans will create new challenges for lenders.

In asking the committee to echo these concerns and requests to the FHFA, Thaler concludes that the committee should consider legislative action “to ensure that this health crisis does not become another housing crisis.”

NAFCU will monitor the hearing today and continue to work with the agency to ensure credit unions’ concerns are addressed.