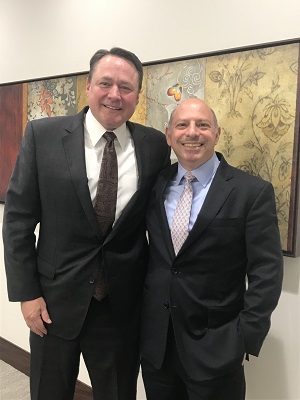 NAFCU acknowledges that fintech can produce real benefits to consumers, however, the association has urged lawmakers and regulators to ensure a level playing field between fintech companies and financial institutions, from data security to consumer protection.

Earlier this month, Federal Housing Finance Agency Director Mark Calabria indicated that the GSEs would be released from government conservatorship in the near future, but hoped that Congress would lead the effort by passing housing finance reform first.

Hunt recently testified before the Senate Banking Committee on credit unions' priorities for housing finance reform, many of which align with Calabria's and the Trump administration's positions on the issue.

NAFCU continues to lead efforts to ensure credit unions' unfettered access to the secondary mortgage market in any housing finance reform and has urged the Trump administration and Congress to work together on a comprehensive solution. Berger also recently met with Fannie Mae's CEO.

In November, NAFCU provided comments to the FHFA on its proposed capital rule for the GSEs. The association generally supports the proposal, but recommended the FHFA allow the GSEs to submit capital restoration plans as allowed under the Housing and Economic Recovery Act – a provision that makes clear Congress envisioned a path to remove the GSEs from conservatorship. NAFCU also argued that restoration plans shouldn't be approved until Congress has agreed to codify certain safeguards.