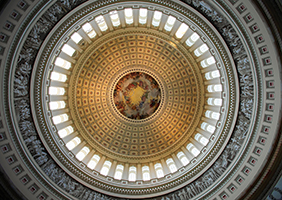 NAFCU President and CEO Dan Berger, along with the heads of the Defense Credit Union Council (DCUC) and CUNA, wrote to the Senate Armed Services Committee ahead of tomorrow's full committee markup of the fiscal year 2022 National Defense Authorization Act (NDAA) to reiterate the association's longstanding call to protect credit union nominal leases on military installations and prevent efforts to allow all banks to operate rent-free on military bases.

"Unfortunately, we expect for-profit banks to once again to ask Congress for a handout by seeking a provision in the 2022 National Defense Authorization Act that would require DoD to treat them the same as credit unions when it comes to leases," wrote the group. "[…] Credit unions fulfill a vital role in the military community. In fact, their focus on the servicemember is evident throughout the military lifecycle."

NAFCU consistently advocates against this bank-sought provision in the NDAA and has successfully kept it from being included. Though the Senate Armed Services Committee announced earlier this year it would delay the markup of the fiscal year 2022 National Defense Authorization Act (NDAA) until this month, NAFCU reignited its advocacy on this issue in May. The House is expected to begin Subcommittee work on its version of the bill later this month, with a full Committee mark-up in September.

NAFCU will remain engaged with both the Senate and House Armed Services Committees as they consider the FY2022 NDAA to ensure this provision is again not included.