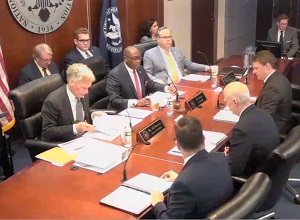 The NCUA Board Thursday proposed a rule to make the 2016 field of membership (FOM) rule consistent with the recent decision from the U.S. Court of Appeals for the D.C. Circuit in the lawsuit brought by the American Bankers Association (ABA). NAFCU stood by the NCUA throughout the lawsuit and has urged the NCUA to continue efforts to modernize FOM rules.

The August decision was largely in favor of the NCUA, but the appeals court asked for additional explanation of the NCUA's decision to eliminate the urban-core requirement for local communities based on core based statistical areas (CBSAs). Following the decision, NCUA Board Chair Rodney Hood said the agency would propose a rule to address these concerns.

The rule proposed Thursday would:

In addition, the board indicated that credit unions may now submit for approval applications for rural districts and the agency will decide on them at the appropriate time. For CSA applications, the board will review them once the proposed rule is finalized.

The proposal will be open for a 30-day comment period once published in the Federal Register. NAFCU will provide credit unions with more information through a Regulatory Alert and submit comments to the NCUA.

Also at Thursday's NCUA Board meeting:

The Risk Assessment versus the Risk Appetite Statement: A Tale of Two Tools