Home Newsroom Remittance rule: Most CUs fall under safe-harbor

Remittance rule: Most CUs fall under safe-harbor 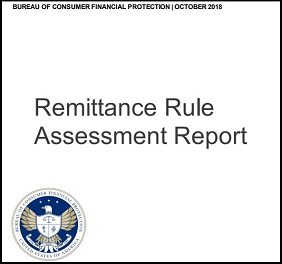 The Bureau of Consumer Financial Protection (previously the CFPB) last week released an assessment report on its remittance rule, which found that most credit unions that offer remittance transfers fall under the 100-transfer threshold. NAFCU has expressed concerns about the rule's highly burdensome compliance costs and urged the bureau to exempt credit unions from the rule.

Although the bureau's analysis indicated that credit unions do not constrain their transfers to stay within the safe-harbor, many credit unions have stopped offering remittance transfer services because of high costs.

While testifying before a House Financial Services subcommittee earlier this year, NAFCU witness John Lewis said his credit union – United Nations Federal Credit Union (Long Island City, N.Y.) – was forced to move its program to a third-party vendor. The move to the vendor cost UNFCU about $1 million and took three months to get underway; it also raised the cost of international remittances for the credit union's members, Lewis said.

Lewis also noted that a lot of credit unions can't afford such a program so have had to stop offering the service, and reiterated NAFCU's position that the bureau should use its authority under Section 1022 of the Dodd-Frank Act to exempt credit unions.

The bureau's assessment also found that the number of credit unions offering remittance transfers increased in the two years after the rule took effect, compared to the two years before, although it noted that the increase was partly due to changes to the data collection question.

While only 17 of the 200 credit unions the bureau sent the survey to responded, they represented 48 percent of the total remittance transfers provided by credit unions in 2017. The bureau received 69 responses total, including 27 from money services businesses and 25 from banks.

The bureau began its assessment of the rule last year; the Dodd-Frank Act requires the bureau to conduct reviews of rules that are classified as "significant" within five years of the rule's effective date.