"NAFCU and our members again appreciate all House and Senate lawmakers who worked on this bill and pushed it through to final passage – especially [Senate Banking Committee] Chairman [Mike] Crapo and [House Financial Services Committee] Chairman [Jeb] Hensarling," said NAFCU President and CEO Dan Berger. "We appreciate President Trump signing the bill, as we can now look towards the future and continue to work with Congress on further regulatory relief measures to ensure robust growth of the credit union industry."

Cabinet secretaries, including Department of Treasury Secretary Steven Mnuchin, Department of Housing and Urban Development Secretary Ben Carson and Small Business Administration Administrator Linda McMahon – all three with whom NAFCU has met – were present for the bill signing. Vice President Mike Pence and lawmakers in both the House and Senate were also present. During remarks before he signed the bill, Trump noted the importance of this relief to the nation's credit unions. 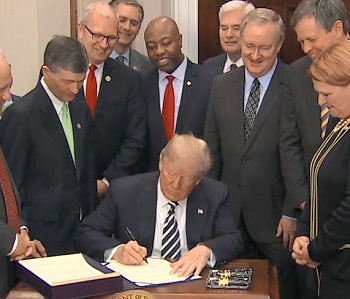 Berger sent a letter thanking Trump for his leadership on helping Main Street financial institutions, and urging him to sign the bill after it passed the House Tuesday. In addition, Berger personally contacted White House staff again to thank them for their dedication to regulatory relief efforts and for working with NAFCU.

NAFCU is already moving forward on a number of other top legislative items still pending before Congress, including risk-based capital (RBC) reform, data and cybersecurity standards, field of membership reforms, and lawsuit abuse under the Americans with Disabilities Act. Berger has asked leaders in the House and Senate to work with the association to address these issues and bring credit unions much-needed regulatory relief.

The association is already making strides on a provision to delay the NCUA's RBC rule. The provision has been added to a House Appropriations Financial Services and General Government's appropriations bill, which is being marked up today. NAFCU has long advocated for a repeal or delay of this rule, and the association's efforts proved instrumental in getting the language added to this appropriations bill as well as H.R. 5841, which passed out of the House Financial Services Committee Tuesday.

Berger noted that the passage of S. 2155 is a good first step in creating a regulatory environment in which credit unions can thrive – both upon House passage of the bill this week and in an interview Wednesday on Fox Business.

Berger with NAFCU's advocacy team has held numerous meetings on Capitol Hill in the past couple weeks to gather support for S. 2155. In February, Berger, along with numerous credit union CEOs, met with Trump to discuss industry issues – including regulatory relief.

NAFCU has been working towards regulatory relief for credit unions since the implementation of the Dodd-Frank Act and will continue to do so.

More on this bill and the relief it will bring to the industry is explained in a post today on the NAFCU Compliance Blog.