Ahead of election, NAFCU pushes for more CU wins 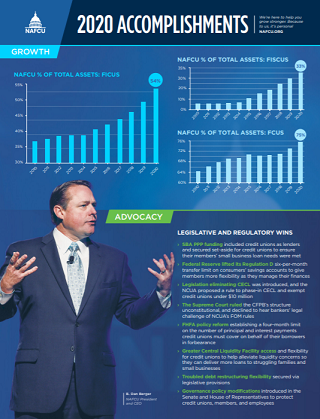 Although 2020 has been a year of challenges, NAFCU and the credit union industry have achieved several wins as they've worked to obtain a more efficient regulatory environment and better serve the industry's 122 million members amid the coronavirus pandemic. With the presidential election less than a week away, here's a look at key issues and how NAFCU will keep fighting for credit unions.

Advocacy is a key component of NAFCU's mission to strengthen the credit union industry. Credit unions are encouraged to bolster the association's efforts by staying up-to-date on the latest issues that could impact operations and members and in contact with lawmakers to ensure they understand how their decisions impact the industry. NAFCU's Grassroots Action Center allows credit unions to contact representatives and senators directly, as well as learn more about candidates and legislation. The association also has pages dedicated to key issues for more information.

Securing regulatory relief and flexibility for credit unions is a top priority for NAFCU and became even more important during the past nine months as the industry faced operational challenges stemming from shutdowns and social distancing requirements, as well as strategic ones in light of members' financial hardships.

While negotiations on a possible Phase 4 relief package continue, NAFCU has kept credit union priorities top of mind, including:

NAFCU is also watching for Congress to address several other issues during the lame duck session:

Stay tuned to NAFCU Today for the latest developments out of Washington.